Virginia Jaramillo’s abstract paintings are energized by a simple premise: “How can I draw in the viewer? How can the artwork hold their attention?”

For her most recent body of work, Jaramillo is delving into what it might look like to take a scientific principle and transpose it to canvas, which she said is connected to her lifelong fascination with science fiction—“I could just let my mind wander”—and her years as a kid in the 1940s and ’50s perusing the Reader’s Digest column “Towards More Picturesque Speech,” which was “filled with such colorful language that it made you visualize these words.”

There is nothing literal about Jaramillo’s approach to science. “Sometimes when I hear of a scientific theory, I can visualize it, but not in the scientific way,” she said. “I visualize it in an aesthetic way, within an aesthetic context, which has nothing to do with the theory itself, but it’s how I see it.”

Speaking with ARTnews in November via Zoom from her studio, a structure attached to her home in Hampton Bays, New York, Jaramillo was nearly finished with a 12-foot-wide painting called Quantum Entanglement, which takes its name from the complex scientific theory dealing with a phenomenon in which two particles become inextricably linked. The painting is mostly black, with some 40 sharp lines in reds and pinks, yellows and oranges, light and dark blues, and greens and purples crisscrossing the canvas multiple times over. At either end are hazy bursts of color meant to represent the linked particles.

“There’s a communication there, no matter what the distance is, and that’s what I visualize, all these lines are lines of communication,” Jaramillo said. Ultimately, she plans to display Quantum Entanglement opposite a similar size, overwhelmingly white painting that she refers to as its sister, and alongside five smaller paintings that visualize brain waves. 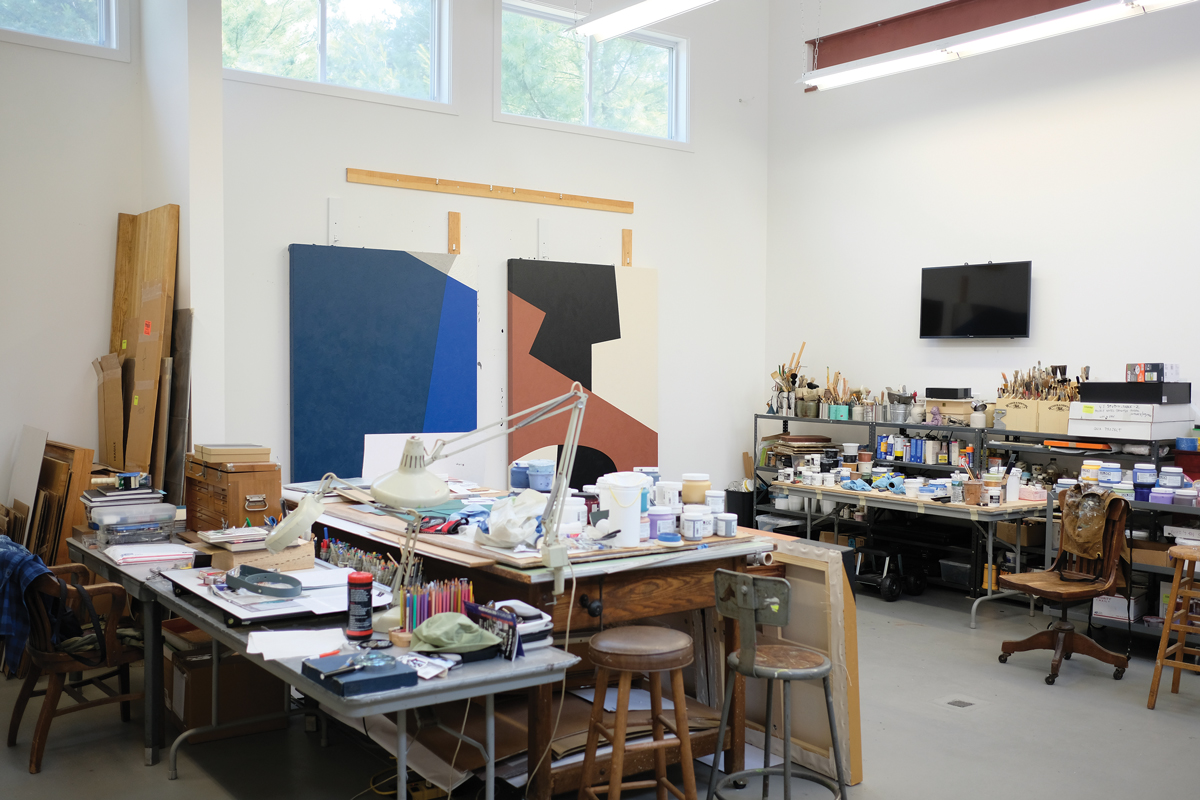 Jaramillo’s studio in Hampton Bays, New York, which is attached to her home, includes two workstations, filled with art supplies.

At age 81, Jaramillo is seeing a resurgence of interest in her work. Her first-ever solo museum exhibition opened at the Menil Collection in Houston last year, a show of eight paintings dating from 1969 to 1974, from her “Curvilinear” series. It was while she was creating those paintings that she had her greatest art-world exposure. She was included in the Whitney Annual in 1972. The previous year, she was the only woman, and the only Latina, to be included in “The De Luxe Show” supported by the Menil Collection, one of the first racially integrated exhibitions in the U.S. Despite that, in the years that followed, her work was under-known to much of the mainstream art world, which Jaramillo attributes to the fact that she was a Mexican-American woman, and was married to an African-American man. 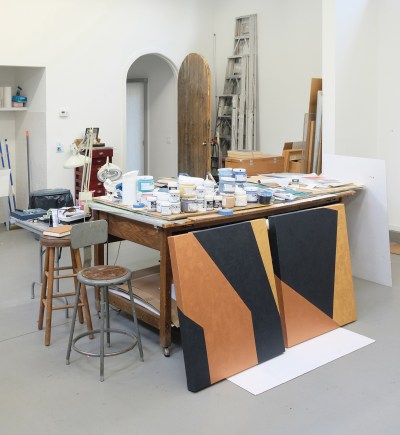 One workstation in Virginia Jaramillo’s studio shows two paintings she was at work on in 2018.

Her current survey at the Menil, on view through July 3, was timed to take place on the 50th anniversary of “The De Luxe Show.” It’s the latest in a series of accolades that has come late in life. Her art has been included in acclaimed group exhibitions like “Now Dig This!: Art and Black Los Angeles, 1960–1980,” at the Hammer Museum in 2011 and the traveling show “Soul of a Nation: Art in the Age of Black Power,” which opened at Tate Modern in 2017. In November, she was one of the winners of the annual Anonymous Was a Woman grant of $25,000, which goes to women artists over 40 as a boost to ensure they keep producing.

Jaramillo wanted to be an artist for as long as she can remember. She spent her childhood in East Los Angeles drawing, re-creating images she found in magazines. “It wasn’t something that I even thought about—it was innate,” she recalled. “Even in school, I was always called Leonarda,” a reference to the Renaissance master.

During high school, she and a select few other students were invited to spend some Saturdays at the studio of Charles and Ray Eames to watch their short films, like Blacktop: A Story of the Washing of a School Play Yard (1952) and Powers of Ten (1968). “Those are films that even today stay with me because it was a different way of seeing,” Jaramillo said. “It was my introduction to a philosophy of seeing—the way of seeing form and structure and the way of form following function and being true to the form.”

After graduating from L.A.’s Manual Arts High School (whose esteemed alumni also include Jackson Pollock and Philip Guston), Jaramillo achieved the kind of success that young artists dream of. When she was just 18, in 1959, one of her paintings was exhibited at the Los Angeles County Museum of Art as part of its “Annual” series. The attention didn’t do much to impress her. “I said, ‘Oh wow, now I’m really big-time,’” she recalled of that time with a laugh. “And no one could tell me anything. I’ve always known I had it.” 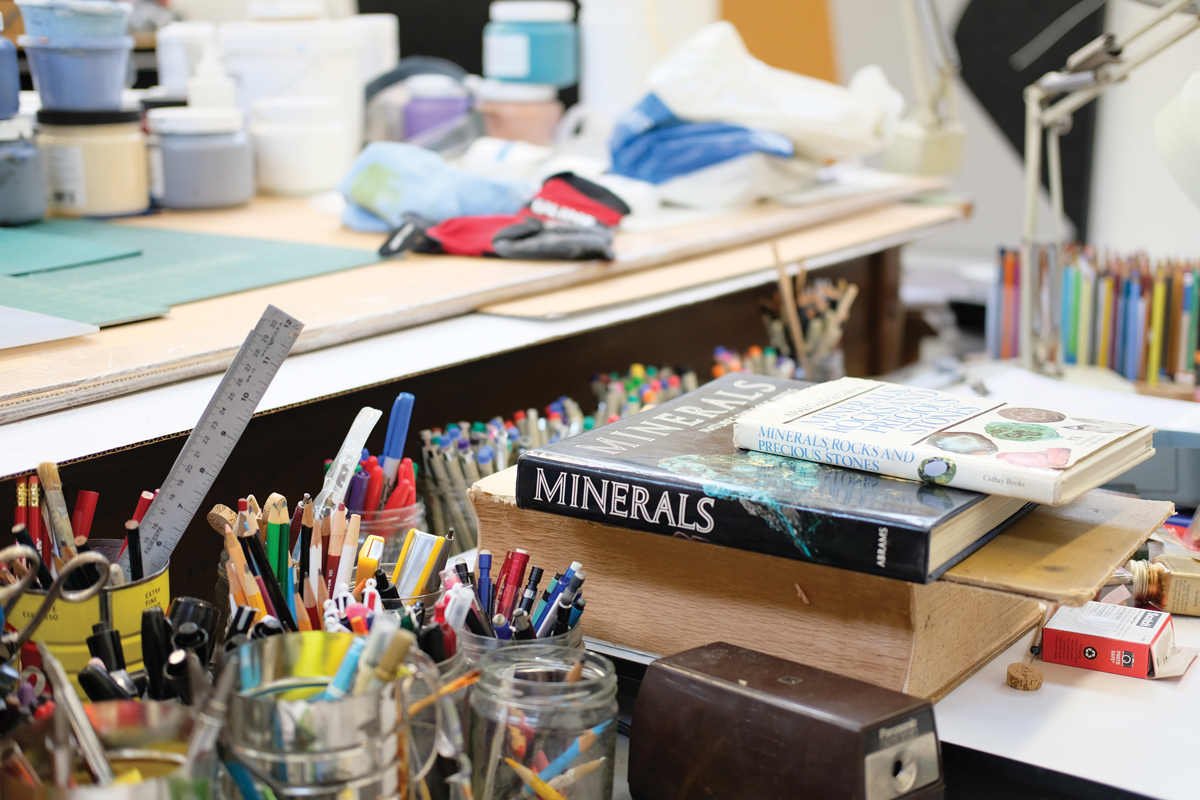 In Jaramillo’s studio are dozens art materials and books on minerals.

Jaramillo describes her early work as exploratory, experiments in doing things to canvas—like melting crayons, dousing them with India ink, scratching the surfaces—to see what would happen. Even as she was learning from the Eameses, she began to explore Japanese woodcuts and a related aesthetic philosophy, called ma, which she would ultimately channel into “The Curvilinear Paintings,” her best-known series. 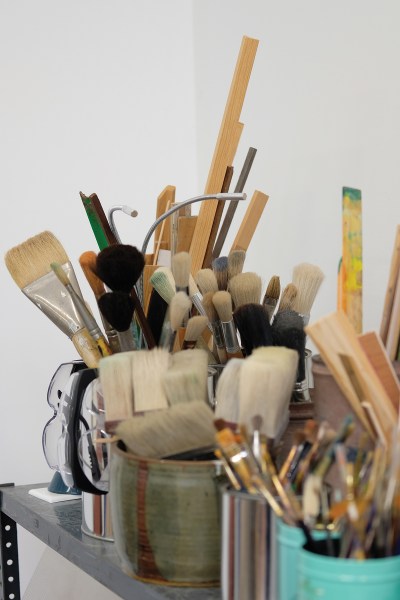 In Virginia Jaramillo’s studio are a line of dozens of paint brushes of varying sizes.

It was around this time, in the mid-1960s, that Jaramillo’s husband, Daniel LaRue Johnson (1938–2017), who was also an artist, won a Guggenheim fellowship, which allowed the couple and their two children to move to Paris for a year. “We were told constantly, ‘If you’re really an artist, you have to go to Paris to see the light. The light is different there,’” Jaramillo recalled. “And we said, ‘What?’—here we are in California—‘What do you mean the light is different? We have a lot of light here.’ ‘No,’ they said, ‘there’s something magical about the light. You’ll see.’ So we went to Paris to see the light.”

Her year in Paris proved influential. “Oh, it changed my entire way of thinking,” Jaramillo said. She felt connected to the history of the city, and Europe more broadly, in particular the Gothic architecture. “The thing I realized was that in creating a painting, it’s about the journey of the completion of the painting.” She doubled down on her commitment to a process-based focus on abstraction, even when it came to priming the canvases and sanding them down herself. (She has never worked with assistants and has no plans to do so any time soon. “Until I need them I won’t get them,” she said, with a chuckle.)

In the late ’60s, Jaramillo began work on her “Curvilinear,” or “Line,” paintings, each of which features a single line, or sometimes two or three, against a monochrome background. In Green Dawn, completed in 1970, a wisp of yellow paint animates an emerald-green canvas. To look at them, you might think their execution was straightforward, but in fact they are the result of an extended process. Jaramillo would sit in front of an 8-by-10 pad and make 20 sketches of a single line before settling on one that would be suitable to star in a painting.

“As simple as they were, they were the most complex because it’s hard to get to simplicity right away,” Jaramillo said. “That’s one of the hardest things to achieve. Sometimes, it would take weeks just to get that line the way I wanted. It had to be right—it had to flow like a strand of hair.” 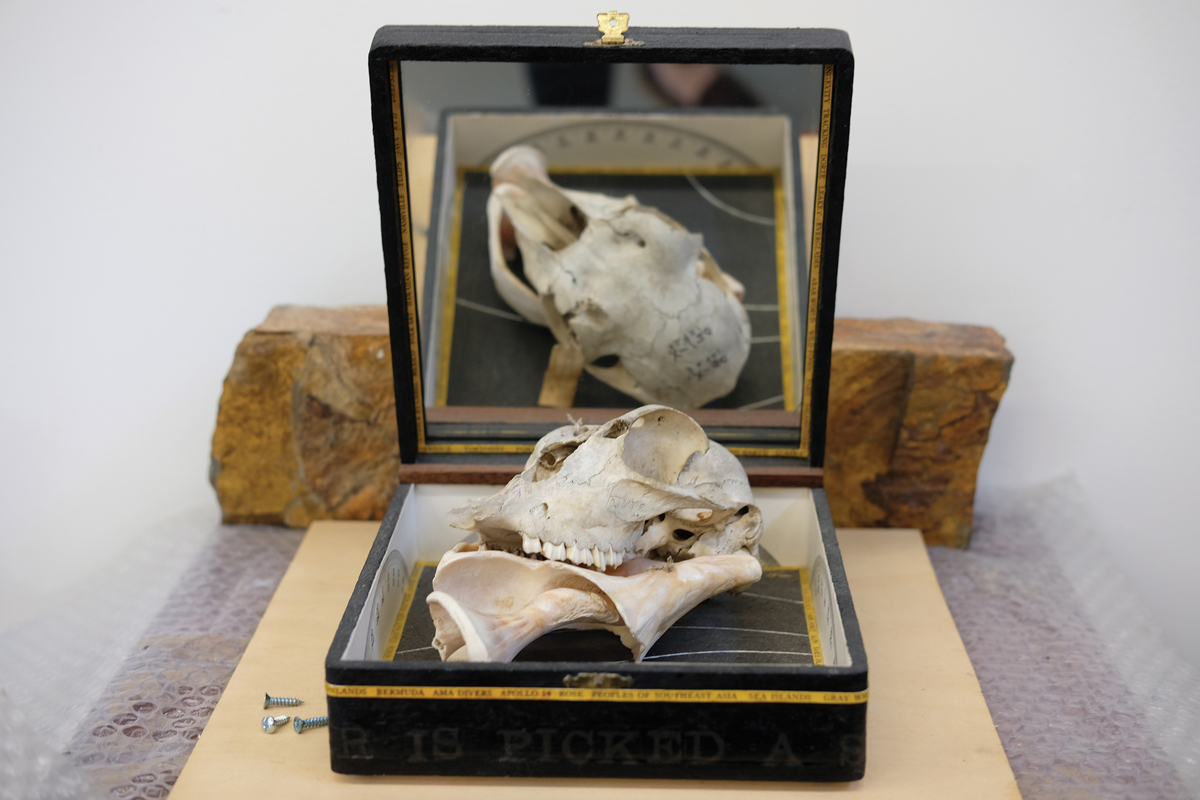 In Virginia Jaramillo’s studio is an animal skull inside a box with a mirror.

In the series that came next, her “Stained” paintings, Jaramillo took that simplicity even further, making acrylics and oil paints behave like watercolors, the various shades bleeding into one another on the canvas.

“I had gone to such a degree of elimination of the pictorial plane that even the line began to disappear—everything just kind of melted and floated,” she said. “That’s when I saw that there was nothing holding this plane together, yet it existed. Why does it still really captivate?”

The flow of color that she saw in her “Stained” paintings led her in the late ’70s and early ’80s to begin making paper by hand, fusing strands of linen with pigment to compose blocklike shapes that would then be pressed together into a sheet. Her years spent learning how to make paper also allowed her to “step back and assess where I was going as an artist and how to use those methodologies to further what I wanted to say as a painter.”

As she enters her ninth decade, Jaramillo insists she has not paid much mind to the years when her art was not receiving as much attention as it could have. “I was just doing the work,” she said. “This is the truth, I never think about it—I’ve never let that hold me back. The system is geared for a minority person, especially an artist, to fail. There are so many blocks, so many hindrances and prejudices, that you have to keep going.”

A version of this article appears in the February/March 2021 of ARTnews, under the title “Virginia Jaramillo Draws a Line.”

How I Made This: Scott Hove’s Immersive Cake Installations

The Best Gaffer Tapes for Artists Are Reliable and Sturdy