More than 100 years after his death, Pierre-Auguste Renoir is still recognized worldwide for his intimate portraits, dreamy landscapes, and depictions of nude bathers. (Despite this, recent protests at various institutions claim that “Renoir sucks.”)  Though the artist began his career as an obscure painter of porcelain, Renoir was well-known by the early 20th century, and today he is celebrated for his highly original fusion of traditional painting styles and more outré ones derived from Impressionism, the late-19th-century movement with which he is associated. The guide below traces some of the key developments in the artist’s life and career, as well as some of his standout paintings.

In his youth, Renoir worked as a porcelain painter.
Born in 1841 in Limoges, a city southwest of Paris, Renoir earned money for his family as a porcelain painter when he was a young man. Honing his talents by copying artworks that hung in the Louvre, Renoir enrolled in the École des Beaux-Arts in Paris in 1862. There, he studied with Emile Signol and Charles Gleyre, through whom he met contemporaries like Frédéric Bazille, Claude Monet, and Alfred Sisley, all of whom went on to achieve acclaim in their own right. Though he had little work or money in these early years, Renoir began exhibiting with the Paris Salon in 1864 while he was still in his 20s. In the following years he took on portrait commissions and began painting en plein air with Monet on a regular basis at La Grenouillère outside Paris. At the time, painting outdoors was not yet in vogue, and artists were still assumed to work indoors, so such a gesture went against what was learned in art academies. 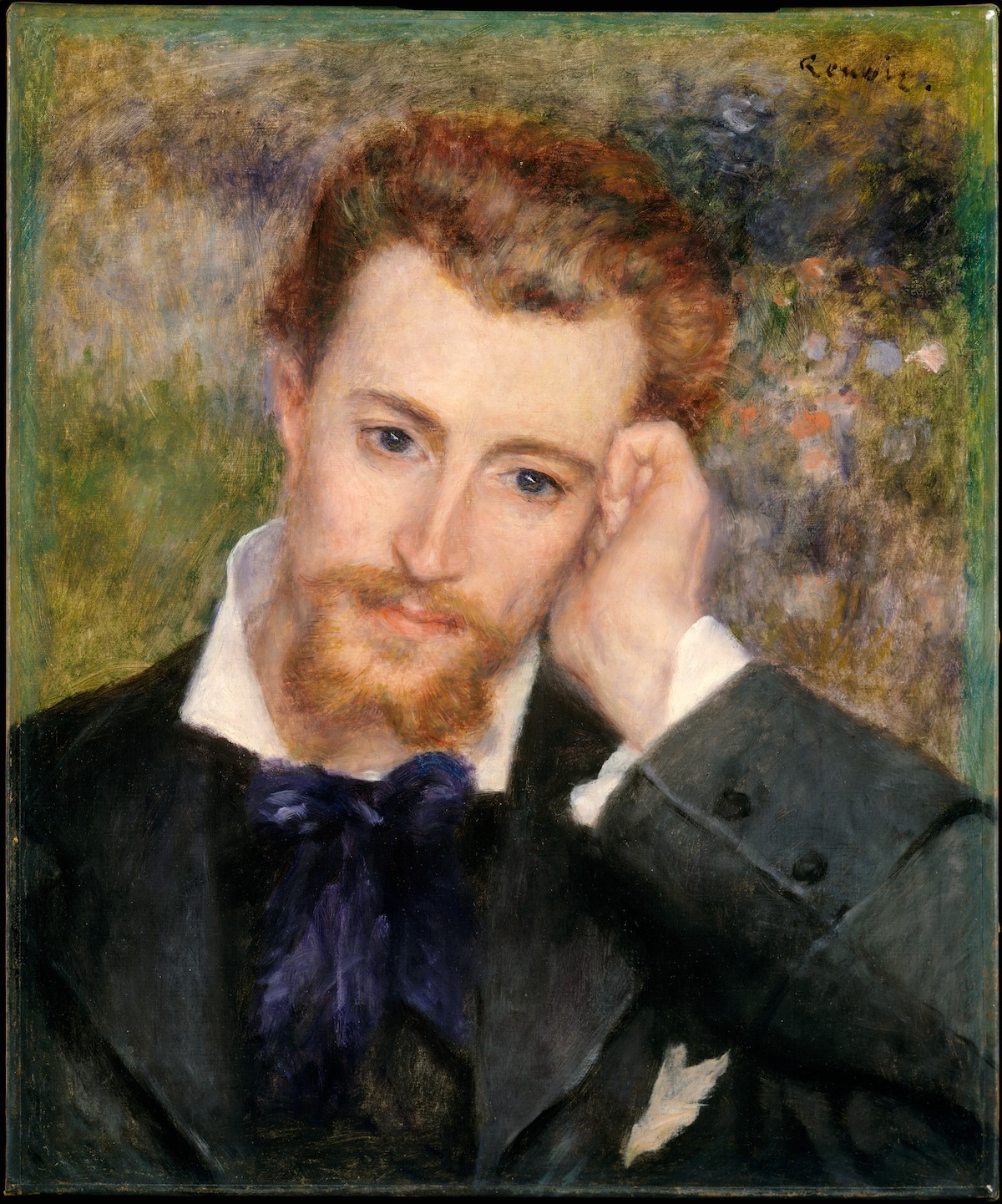 Renoir’s success accelerated in the 1870s with a successful portraiture practice.
The artist returned to Paris from service in the Franco-Prussian war in 1871, and his portrait business remained lucrative and popular. He painted figures such as the pastry chef Eugène Murer, the aristocrat Madame Georges Charpentier, the banker Paul Berard, and many others, often cultivating a personal familiarity with his subjects that was reflected in his portrayals of them. The figures that Renoir painted in such portraits appear to glow, as if they are being illuminated by a spotlight pointed at a stage. Despite the artist’s Impressionistic touches to the backgrounds of such works, the idiosyncrasies and peculiarities of his subjects were rendered with great care and detail. Among the works Renoir created in this time were also landscapes and still lifes painted at Berard’s home. During this decade, Renoir continued painting en plein air in locations including the Seine River, and he maintained his relationship with Monet and met Gustave Caillebotte and the dealer Paul Durand-Ruel, with whom he showed works in London. He showed work in the Salon des Refusés—which originated as a showcase for art that was rejected from the more academic Salon—in 1873 and the first Impressionist exhibition in 1874, and he would go on to participate in subsequent Impressionist shows in 1876, 1877, and 1882. 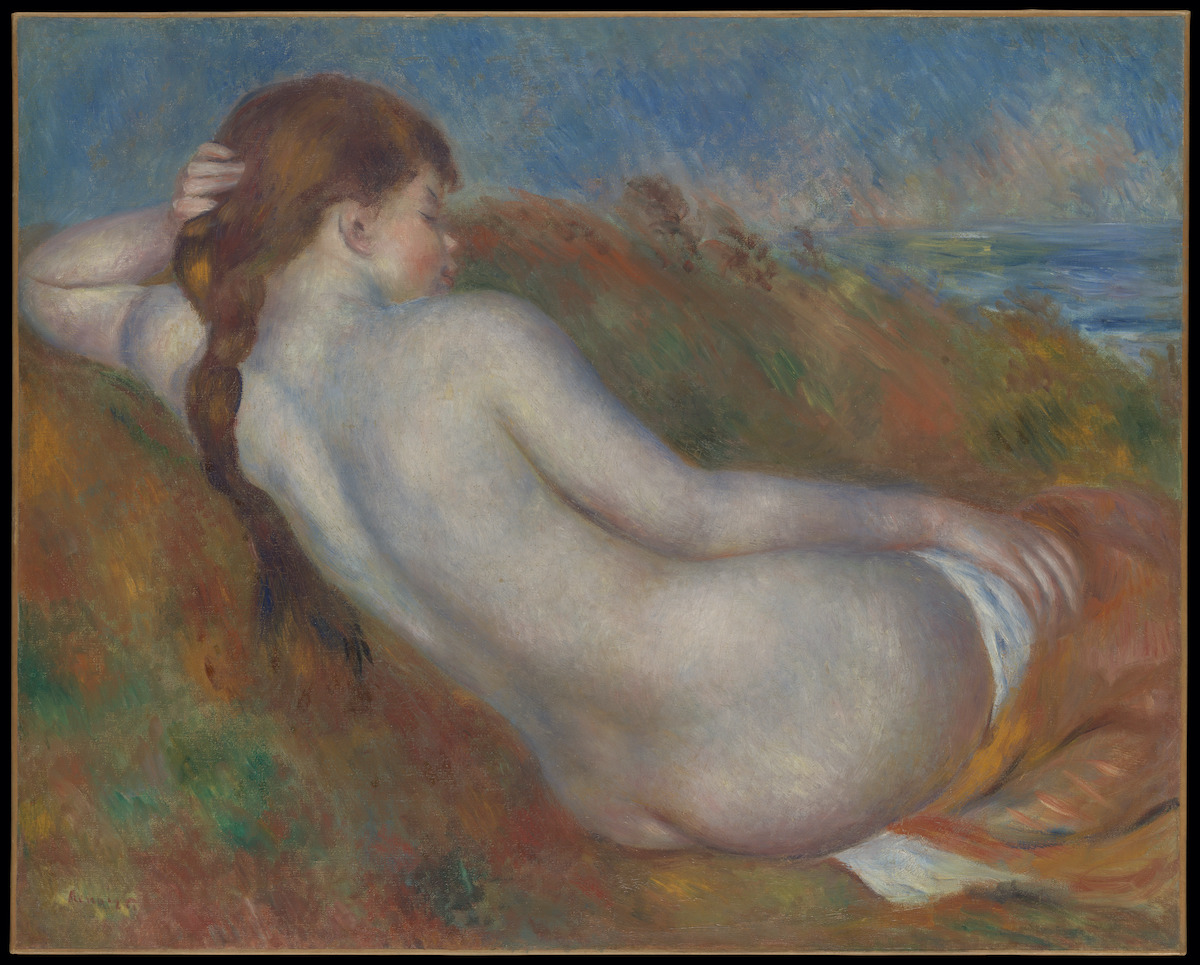 Renoir became intensely interested in Old Masters artists and classical painters in subsequent years.
In the early 1880s, Renoir traveled to Algeria, Spain, and Italy, to study the work and techniques of artists like Eugène Delacroix, Diego Velázquez, Titian, and Raphael. During these travels Renoir met the composer Richard Wagner and painted his portrait in 35 minutes. (That work now hangs in the Musée d’Orsay in Paris, which has one of the finest collections of Impressionist art in the world.) Renoir’s portrait of Wagner, as well as works like Reclining Nude (1883) and Young Girl Bathing (1892), reflected the artist’s new interest in the aesthetics of classical painting. Young women would become the subjects of many of Renoir’s works, and it is work of this kind for which Renoir is best known today. (In recent years, critics and historians have addressed the role that the male gaze plays in these works.) But Renoir added a modern twist to the classical nude, often employing models for the creation of such works and situating them in Impressionistic landscapes. 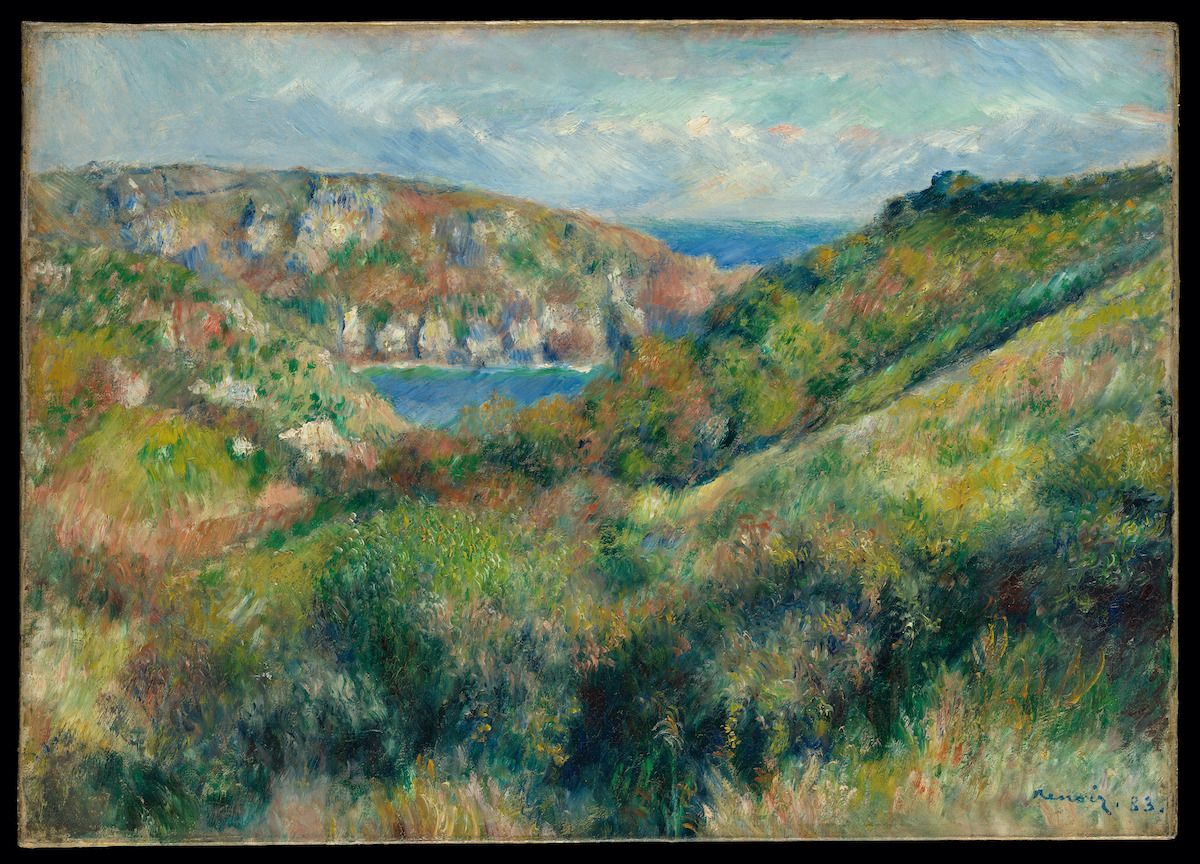 Pierre-Auguste Renoir, Hills around the Bay of Moulin Huet, Guernsey, 1883, oil on canvas.

He painted a famed series of landscapes while summering in Guernsey.
In 1883, while staying on Guernsey, one of the Channel Islands, Renoir created 15 paintings depicting the Moulin Huet bay. In these works, the artist seemed to return to his Impressionistic roots with painterly marks in the lush grass and light blue sky. With their loose brushwork, these paintings depict nature in flux as grass moves in the wind and the ocean peacefully flows onward. At times, because of how brushy Renoir’s strokes are rendered, his landscapes appear to flirt with abstraction. He would sell four of those paintings to Durand-Ruel that same year, and they would be celebrated 100 years later in a batch of postage stamps issued in Guernsey in 1983. 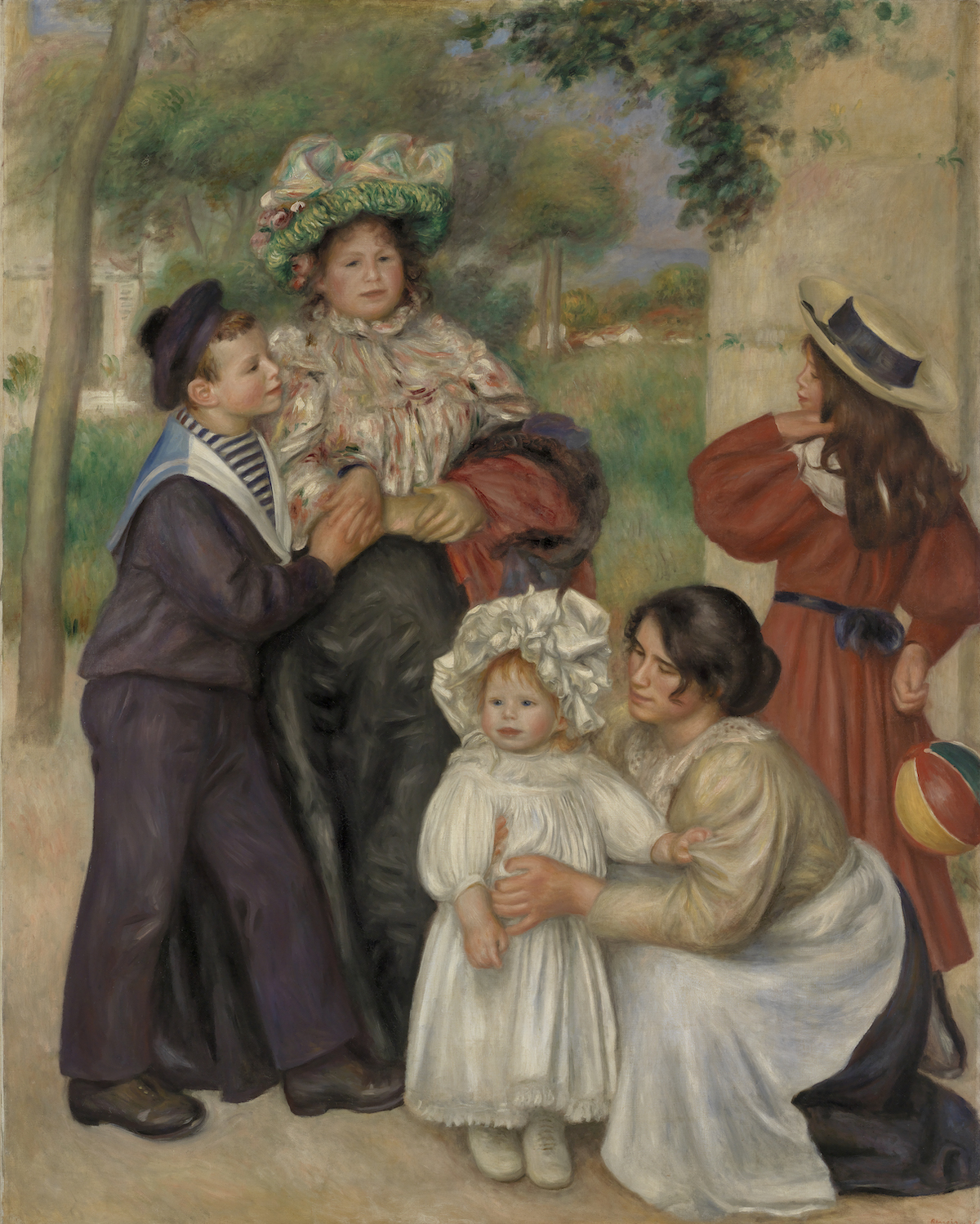 In the 1890s, Renoir paints his family.
Renoir married Aline Victorine Charigot, who had been a model for his 1881 painting Le déjeuner des canotiers and with whom he had a son, Pierre, in 1885. In the following years, during which the couple would have two more sons, the artist focused on painting scenes of his family members. (His son Jean would go on to become a well-known filmmaker, starting with silent movies and working into the 1960s.) Among works of this kind are The Artist’s Family (La Famille de l’artiste), 1896, which depicts Aline with Pierre, Jean, and a nurse. In paintings such as this, Renoir depicted bourgeois French life at the time, using his signature brushwork to accentuate the features of his figures. 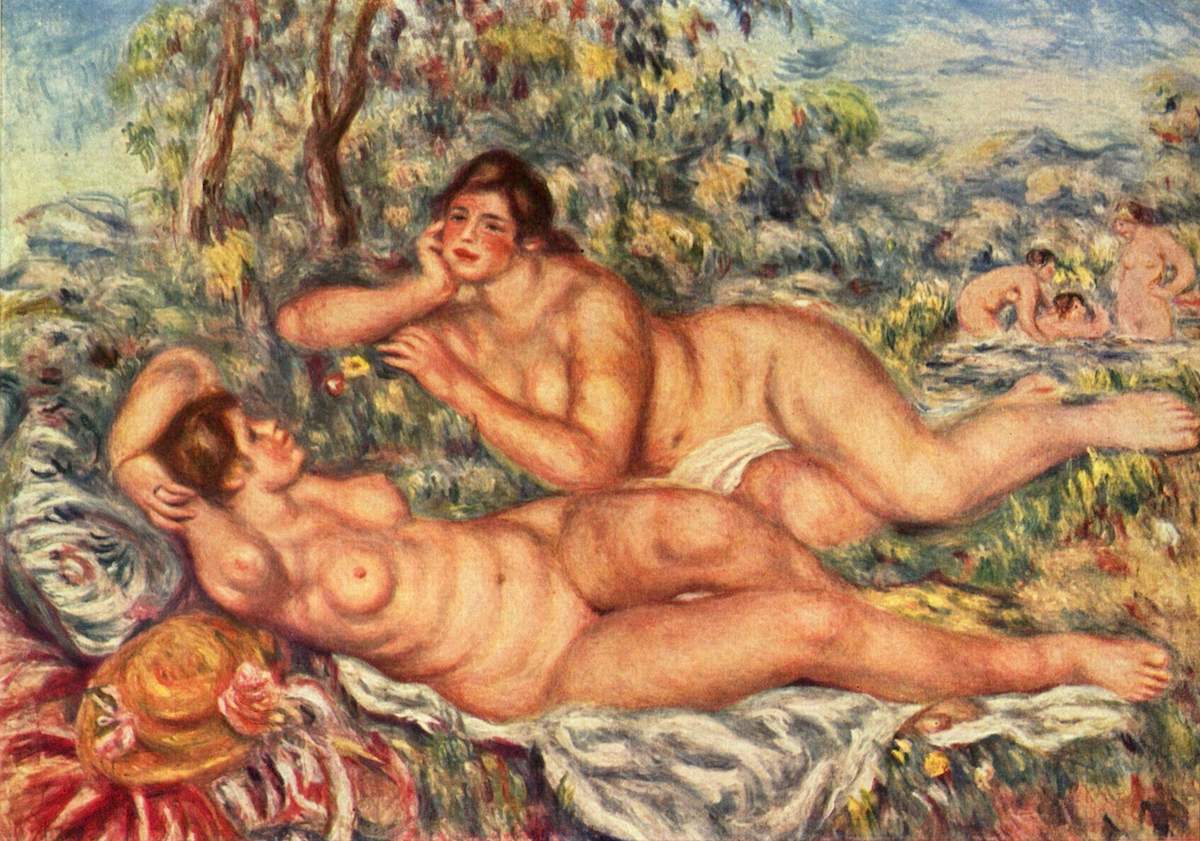 Renoir remained restlessly curious and exploratory in the final years of his career.
Suffering from arthritis, Renoir moved from Paris to the French Riviera town of Cagnes-sur-Mer in 1907. He worked with an assistant, Richard Guino, on sculptural works, and continued creating portraits clearly influenced by the Old Masters. His longstanding interest in painting bathers was also reinvigorated in this time, with one work of this kind, painted in the last year of his life, depicting two nude women whose bodies seem to undulate, thanks to the way Renoir applied his rich hues. At the time of his death in 1919, Renoir was a celebrated figure in the art world. Today, his work can be found in major collections around the world, including the Musée d’Orsay, the Metropolitan Museum of Art in New York, the Barnes Foundation in Philadelphia, the National Gallery of Art in Washington, D.C., the Museum of Fine Arts, Boston, the Rijksmuseum in Amsterdam, and elsewhere.

After a Lockdown and New Ownership, Where Does Art Basel Go From Here?