Bay Area artist Joan Brown, who died in 1990 at age fifty-two, produced a vast body of figurative paintings with an offbeat, vernacular appeal. This exhibition at Venus Over Manhattan featured a dozen of Brown’s dazzling canvases, primarily from the 1970s, characterized by dreamily composed scenes and highly stylized figures.

Brown emerged within San Francisco’s Beat and burgeoning “Funk” art scenes of the 1960s, alongside friends such as Jay DeFeo, Bruce Conner, and Wallace Berman. She and her cohort took pride in flouting the artistic conventions dominant in New York and Los Angeles at the time, making expressive, idiosyncratic work that served as an irreverent retort to the detached slickness of Minimalism and Finish Fetish. Despite her underground credentials, Brown’s subject matter is often bracingly banal: domestic scenes, dancing couples, swimmers, animal portraits, pictures of her husband. But the allure of Brown’s work is how it unsettles viewers’ assumptions about such mundane subject matter: Woman Waiting in a Restaurant (1975), for instance, depicts little more than what is described in the title, but the painting’s acid palette and mannered central figure, who appears motionless, as if in a trance, give this everyday scene a vague sense of menace. 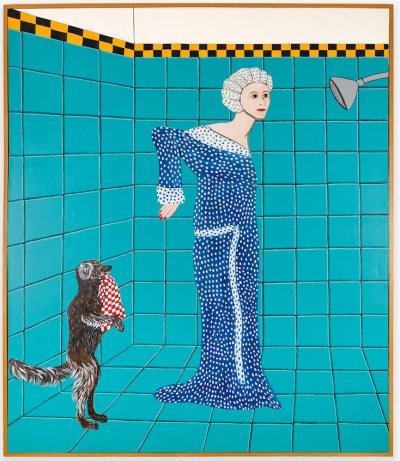 Joan Brown, Woman Preparing for a Shower, 1975. Enamel on canvas, 84 by 72 inches; at Venus Over Manhattan.

Brown’s best moments—the funniest, the weirdest, the most irresistible—are romantic and awkwardly affected at the same time, sweet and nostalgic but also airless. Take the large 1975 canvas Woman Preparing for a Shower, which greets visitors at the exhibition’s entrance. Standing against a striking backdrop of electric turquoise bath tile, a shower-capped woman with long red nails prepares to remove her robe, while her companion—a stringy pet dog standing on its hind legs—waits with a checkered towel in its mouth. The expressionless figure is frozen in a contorted stance, heightening the scene’s subtle strangeness. In another work, Let’s Dance (1976), a dining couple in the foreground is set against a flat cerulean ground, while the silhouettes of dancing figures in the distance float alongside a piano player. A hand extends from the painting’s right edge to fill the male diner’s wineglass; no one seems to notice that his partner’s glass has tipped over, leaving a large red stain drifting down the sides of the tablecloth. The sentimentality of these scenes is tempered by the figures’ stilted poses and the stiffness of Brown’s painterly technique, giving the works a surreal, dreamlike quality. Not all the paintings pulled this off: Dancers in a City #4 (1973), for instance, a large-scale diptych depicting a trio of colorful silhouettes dancing, an urban skyline in the background, possesses an unironic goofiness that reads as pantomime. Grey Wolf with Red Clouds and Dark Tree (1968), a rendering of a spellbound wolf staring out against a noxious red skyline, similarly lacks the bizarre interiority that makes the rest of the show so enchanting. 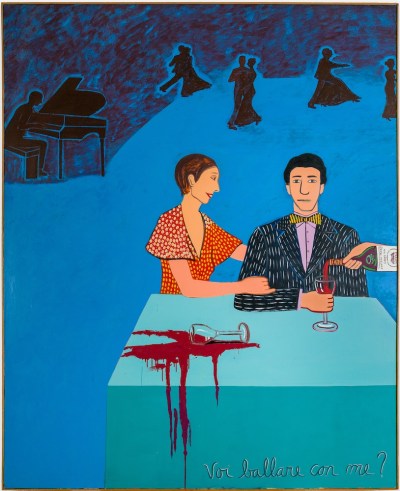 Indeed, the show’s strongest works all struck me as self-portraits, in one way or another. Some, like The Swimmers #1 (Diving) and The Swimmers #2 (The Crawl), 1973, a pair of beguiling canvases in which flat, faceless silhouettes move through nearly monochrome grounds of green water, directly allude to aspects of her life—in this case, her passion for the titular sport—while more fantastical scenes, such as Woman Preparing for a Shower, seem like exteriorizations of the self. Only one was explicitly identified as such: Self-Portrait in Fur Hat (1972). Posing in a paint-spattered shirt against a checkerboard ground, she appears paralyzed in a position of clenched stillness, staring past the viewer, as if lost in her own world.

Stanley J. Seeger, Radical Collector of Disparate Objects: ‘He Had No Interest in the Investment Potential of Art’

Second Half of Christo and Jeanne-Claude Collection Sale Brings Total to $11.2 M.