The digital artist Beeple’s first major collector was Tim Kang, founder of Cue Music and an investor in cryptocurrency. Well before Beeple’s $6.6 million sale at Christie’s, Kang had broken all previous records by buying Beeple’s “MF Collection” for $777,777.77 on the non-fungible token platform Nifty Gateway in December of 2020. This sale launched Beeple from a niche artist working on the digital fringe to a force to reckon with, as the auction made clear three months later.

The 28 year-old Kang bought his first house about three months ago. All those empty white walls had Kang considering buying art for the first time, but that was before he discovered NFTs. A heavy investor in Ethereum back in 2016, Kang was intrigued by the NFTs, which are minted on the Ethereum blockchain. Once he bought his first piece by the well-known crypto-artist Pak, he never looked back. His purchase of Pak’s “Moebius Knot” for 77 Ethereum, or $42,720, was the biggest sale ever made on SuperRare at the time. After that sale, Kang found himself a part of a burgeoning community of NFT artists and collectors. Soon after, Beeple reached out to Kang on Twitter.

“He just wanted to connect with collectors, not in a selling way, he just wanted my opinion,” Kang told ARTnews. This contact with Beeple sparked a profound respect in Kang for artists working in the digital medium who have struggled to monetize their work, at least until NFT minting came around. Beeple showed him his “MF Collection” and told him about his vision for his Nifty Gateway drop as a potentially historic moment for both cryptocurrency and crypto-art. Kang was in.

When the Nifty Gateway drop came around, Beeple had twenty works for sale that came with physical counterparts. It had been Beeple’s intention to have an unboxing session with each collector who bought work from the sale. But when the drop came around, Kang realized that a group, or possibly an individual, that goes by the name “The Fund,” had used multiple accounts to buy up almost all of the works. Kang felt upset that The Fund had gone against Beeple’s artistic vision for the unboxing sessions. When it came time to bid on the MF Collection, Kang took the last bid for $380,000 to the final price of almost $800,000 in part as a way to make up for that disappointment.

Kang also says he wanted to help be a part of a movement to validate NFTs as legitimate artistic work. “It was an historic moment,” Kang says, “This has so much sentimental value to me because it could really symbolize the start to our future.” In other words, the opening of a wider horizon for collectors of digital art.

Kang has been embedded in the crypto world since 2016. He believes that the recent explosion of the NFT market is the vehicle that will usher in crypto’s influence and create more people like him.

“Crypto and blockchain is more than just a stock; the underlying application is a paradigm shift. Anyone can have an opportunity to participate in a global market,” Kang said. “I have been waiting for so long for the breakthrough, for this to really impact the world beyond just cryptocurrency. Digital art is the perfect medium to communicate the underlying implications of blockchain on self-sovereignty.” NFTs demonstrate how blockchain technology can offer decentralized forms of authority: secure ownership without a gallery or foundation.

The painter Lucien Smith noted that the recent booms in cryptocurrency prices have given birth to a new class of potential philanthropists and art collectors. “What you have right now are these crypto-millionaires who are trying to create assets with the money that they’ve accumulated. One of the only ways they can do that right now is through the NFT market, because it accepts cryptocurrency,” Smith said.

The relationships NFT artists build with their collectors are also quite important for building their potential patron’s confidence in the medium. Smith noted that while a relationship with a collector either be incredibly positive or incredibly negative, having relationships with collectors who are emotionally invested in one’s work has, “tremendous upsides.” Convincing collectors that an NFT is worth investing in is part of a successful crypto-artist’s job.

Alvaro Luken, a former crypto-miner, happened to buy one of Beeple’s early drops where each edition cost just $1. Once he got an offer for $700 he sold the “Politics is Bullshit” piece right away after talking to a “non-crypto” friend who told him he’d be crazy for not selling at that price. “I regret it, I left $45,000 on the table,” Luken said, referring to a typical offer for the piece at the time. “But, I was kind of isolated, because you’re seeing something that other people don’t.”

Beeple had also anticipated that people wouldn’t see value in NFTs. He wrote in his description of the piece, “ok first off it’s a fucking dollar, if you need extra convincing from some BS artist’s notes wether you want to spend a dollar on this i will punch you in the god damn face. smash the buy button ya jabroni.” An edition of that piece recently sold for $150,000.

Luken recalls a time he had told an investor friend about NFTs, telling him to watch that space to which his friend replied, “That does not make any sense to me; I don’t believe in it; it’s kind of garbage.” Meanwhile, however, Luken has developed a strong relationship with Carlos Marciel whose work builds off of ancient Mexican motifs. Luken found Marciel’s work to be the perfect bridge between his interest in crypto and his Mexican heritage. After buying “Serpent-God”, his first NFT, he made a promise to buy the rest of the pieces in the collection, and he has. Though Luken has a standing offer of $10,000 on “Jaguar-Soul” (Cameron Winklevoss owns the other edition), he has no intention of selling, intending instead to pass it on one day to his kids. 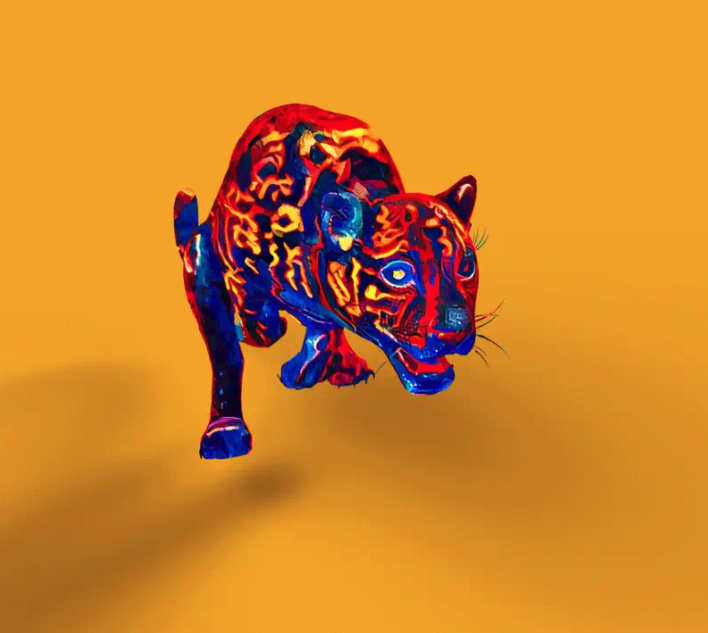 Kang had a very similar trajectory. Similarly to Luken, he initially didn’t tell his friends about the enormous sums he put down to purchase Beeple’s work, yet he’s developed a strong emotional attachment to the work. Kang received an offer on the “MF Collection” for $5 million but refused. Kang also intends to pass the work onto his future children.

In the case of the crypto-investor and digital artist, patronage goes beyond the typical benefits of the artist-patron relationship. The NFT unites them in a common vision of a better world brought about by this disruptive technology. In a way, the immense fortunes that digital artists have amassed is proof of concept: a global, decentralized economy, lacking middlemen and regulation, does indeed generate wealth outside of its typical circulation amongst the elite.

Within this dynamic is an alluring permeability. A young crypto-miner like Luken has some degree of relationship with Winkelvoss by virtue of owning editions of the same piece, and digital artists find themselves rubbing shoulders with leaders in crypto. The promise of a radically different social and economic interaction between classes and types of people has come to life, for certain people — but for how long? Early internet adopters had that similar feeling of a global, democratic, accessible forum, but soon enough that early promise dissipated as digital spaces were monetized and billions more people began to participate.

While the potential to make thousands in NFTs as a digital artist exists, the range of artists actually benefiting from the recent market jumps is hard to quantify. Jack Dorsey is sitting on an offer of $2.5 million for an NFT of his first Tweet, but most artists won’t experience that kind of cashout, not even close, despite rare successes like Beeple’s. But the potential is there and that’s enough for artists to try.

Those involved in the crypto world recognize that how this technology is utilized and evolves over time depends on how they help to shape it in its infancy. For his part, Kang created the Sevens Genesis Grant for digital artists to address the barriers that prevent them from making their own NFTs. The grant will provide funds to cover the costs of NFT minting, educate digital artists on the technology behind NFTs, and highlight their work. “The beauty of this technology is that it’s very global. There’s no intermediaries. It’s cross borders. I really wanted to just go do something that really can provide equal opportunity for artists across the globe.”