If you want to diversify the art world, you need to begin by diversifying the art schools. During my 30 years teaching at the California Institute of the Arts (CalArts), the absence of race-based scholarships made that goal impossible. Minority applicants were less likely to be able to attend an expensive private art school without scholarship support, and we lost many applicants primarily because we were unable to provide sufficient financial aid.

In the early 1990s, I had my biggest recruitment disappointment: losing Kara Walker to the Rhode Island School of Design. I don’t know if she would ultimately have attended CalArts, but because we did not have competitive scholarships, we took ourselves out of the running. Had we provided help, we could easily have diversified the program many years ago. So earlier this year, colleagues and I created a limited program to begin fundraising for a larger program dedicated to bringing in Black and Latinx graduate students.

At CalArts, lack of diversity is a serious problem. When I began teaching there in 1989, two Black students could be counted in the graduate program of about 45. During my time at the school, the number of MFA graduates who self-identified as Black is just 35. It’s notable how many of the few Black students we have taught went on to have important careers, among them Lyle Ashton Harris, Gary Simmons, Henry Taylor, Mark Bradford, Rodney McMillian, Kira Lynn Harris, Lauren Halsey, and Edgar Arceneaux. They overperformed in relation to their white peers and diversified the art world to a greater extent than I could possibly have predicted.

Sadly, for me, the imbalance I encountered at CalArts represented my lived experience as a Black person in America. Because of hindrances I experienced as a young person, I learned early on that I lived in a country made up of two societies, one privileged (white) and the other underprivileged (people of color). Life in America for Blacks was a never-ending struggle for equal access; entrenched racism informed my expectations. Although the imbalance I saw wasn’t surprising, I never lost the feeling that it was wrong. 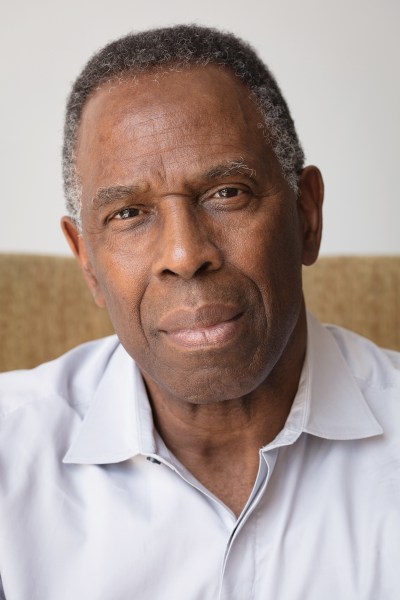 I was born during the Jim Crow era of legalized discrimination and experienced the subsequent social changes created by the civil rights movement. I saw racial separateness shift from a de jure to a de facto system of discriminatory practices. After the passage of the Civil Rights Act in 1964, America became very accomplished at preserving practices that discriminated against Black people without relying on laws. This was aided by an interpretation of the Bill of Rights, particularly the First Amendment, that disabled the idea of racial equality by setting the rights of one group against the rights of another. This allowed forms of segregation that were immune to laws prohibiting discrimination. For example, the Supreme Court in 2007 advanced an interpretation of equal protection that allowed for segregated schools if those schools were not intentionally segregated. In the decision for this case, which challenged race-conscious desegregation plans, Chief Justice John Roberts wrote, “Where segregation is created in a de facto manner (not created by government policy), it would violate the Constitution to take racially explicit steps to reverse it.” The principle was that equality cannot be enforced by removing the rights of one group for the sake of another. This ruling did not recognize the concept of institutional racism or the fact that institutional racism is itself a product of human intention.

Founded in 1961, CalArts, like almost all schools, was and still is segregated. The argument I have heard over and over in my quest to create diversity was that, if benefits were given to one group at the expense of another, equal protection would effectively be denied. The problem with this interpretation of the Bill of Rights is that it protects practices that are discriminatory by setting up policies that institutionalize segregation and render illegal policy solutions that are designed to desegregate—such as race-conscious distribution of scholarships. 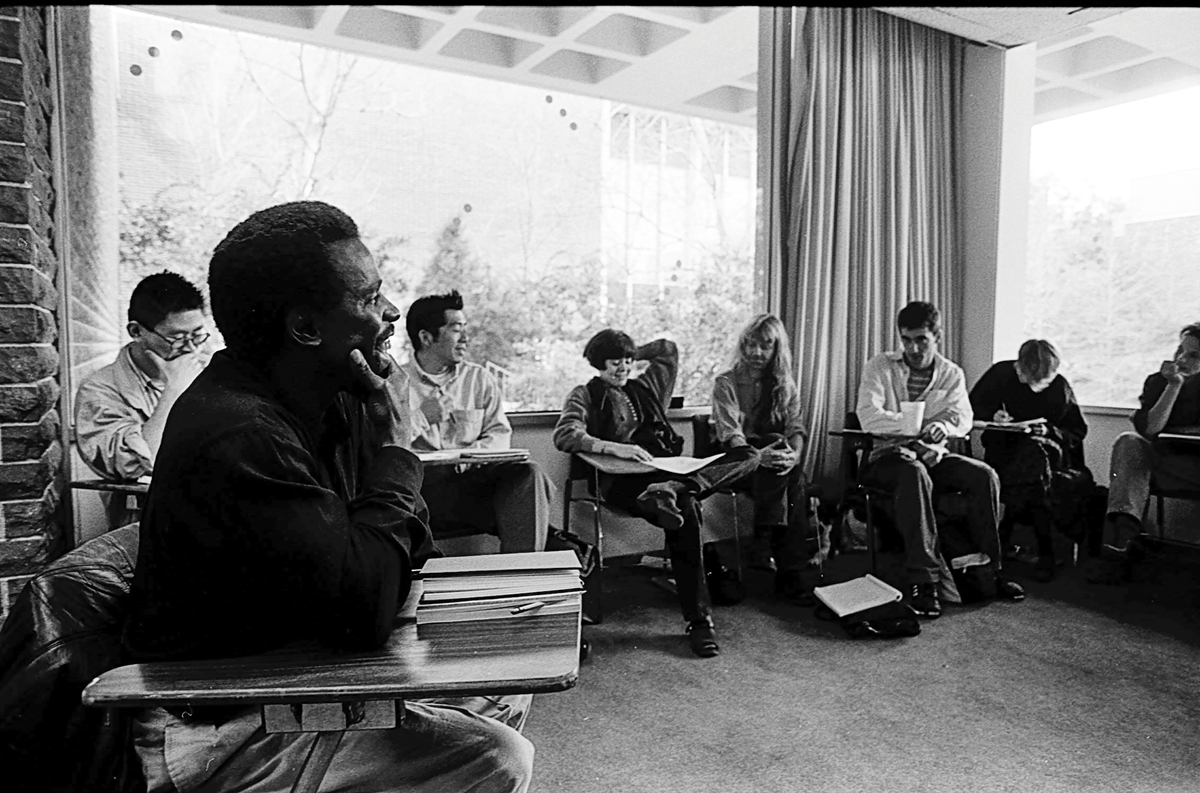 Charles Gaines teaching at CalArts in 1992.

I deal daily with white supremacy—the belief in the natural superiority of the white race—mostly through institutional racism. Many whites believe that there are more options available for Blacks to overcome underrepresentation than actually exist, that what happens to a Black person is a result of personal choices. Here is how that belief manifested itself in my struggle to create minority scholarships: the need for financial assistance for minorities was obvious to liberal-minded people, and I received a lot of verbal support for my efforts over the years—but I received no money. And not only no money, but no interest in even trying to raise money.

There were a couple of reasons for this. The first was the fear of reverse discrimination as defined by the Supreme Court: that if you are to have race-based solutions, you need to prove that they would benefit not just Blacks but all of society. (I have never understood why “the benefit of all” has to be a legal standard, except as a backstop to protect white people if Black people suddenly assumed power.) Furthermore, many people continued to believe in an inverse relationship between the percentage of minority students in an art program and its standards: any increase on that 10 or 15 percent would be considered a sign of a lowering standard. 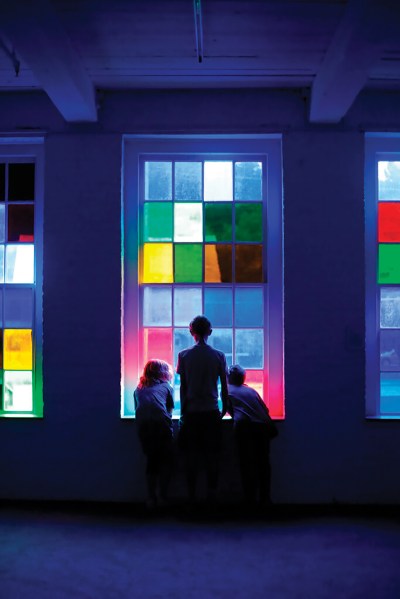 Kids gaze through glass windows in the 2019 MASS MoCA exhibition “We Already Have What We Need” by Cauleen Smith, who helped seed change at CalArts when she began teaching there in 2018.

When I created the fellowship program for CalArts, I was inspired by artist and filmmaker Cauleen Smith, who joined our faculty almost two years ago with a personal mandate to create a minority scholarship. (Before she came on, I was joined in this by other faculty such as Sam Durant and Matthew Shenoda, now at RISD.) Smith took up the mantle and worked very hard at it, discovering the same resistance that I had experienced. Her diligence challenged me. I collaborated with her to create a proposal where I would fund the program directly for two years, but with the caveat that CalArts would find matching funds.

For reasons I don’t fully understand, we began to see considerable support after years of inaction. Ravi Rajan, who became CalArts president in 2017, took the unusual step to use his office to spearhead support. Art collectors Jill and Peter Kraus immediately stepped forward with matching funds (Jill is a CalArts board member), and that was followed closely by a major matching contribution from David Kordansky, whose namesake gallery in Los Angeles has undertaken its own project of diversification. (Kordansky was one of my students and mentees at CalArts.) Because of this list of supporters, we are now able to provide at least four scholarships over two years—as part of what the school decided to officially name the Charles Gaines Fellowship. In addition, we are seeing success in our effort to make the fellowship program permanent by creating an endowment.

The present political moment is playing a major part in our ability to find support. There is increased recognition that white supremacy and institutional racism exist as destructive forces in our society, and I have to credit the work of activist movements like Black Lives Matter, Color of Change, and the Equal Justice initiative—to name just a few—for the work they have done in raising awareness. But I am not naive enough to think that white supremacy has become an anachronism, especially in the art world. The resistance to diversification is alive, as institutions like schools and museums mishandle one social conflict after another. All we can do is continue to take steps, however small, in the right direction.

A version of this article appears in the February/March issue of ARTnews, under the title “Diversifying the Academy.”