This month, Sotheby’s will auction a work that combines art and fine spirits in a singular piece: one bottle from The Macallan Anecdotes of Ages Collection, to benefit the diversity, equity, and inclusion initiatives of the Solomon R. Guggenheim Museum in New York.

The bottle hails from The Macallan’s new whisky-and-art collaboration with artist Sir Peter Blake. Each of the collection’s 13 hand-blown bottles holds The Macallan whisky from 1967, and features an original Sir Peter Blake collage illustrating the Speyside distillery’s history and community, and the beautiful natural landscape of The Macallan Estate.

“Each collage in the Anecdotes of Ages Collection is inspired by The Macallan’s history and heritage, one that respects time and craft, two essential components of my own creative process,” Sir Peter Blake says. “I meticulously worked on each collage, pulling from The Macallan Estate’s rich history to complete a collection that is a celebration of art and whisky.”

After graduating from the Royal College of Art in 1956, Sir Peter Blake created a wholly unique style—part homage, part assemblage and pure genius. He juxtaposes type, photography, and color to create contrasts that offer pop figures and current events in a new light.

Sotheby’s will auction one of the original 13 bottles. Available as a limited edition will be 322 bottles featuring replicas of the 13th bottle’s label and the same highly limited edition 1967 whisky. Each bottle is nestled in an oak box featuring a photo collage, accompanied by a green leather book sharing label artworks and a certificate of authenticity.

While this is The Macallan’s third such cooperative effort with Sir Peter Blake, the distinguished whisky maker has a long history of working with artists to create singular bottlings. Indeed, the top Sotheby’s searches are Picasso, Banksy, Warhol … and whisky. 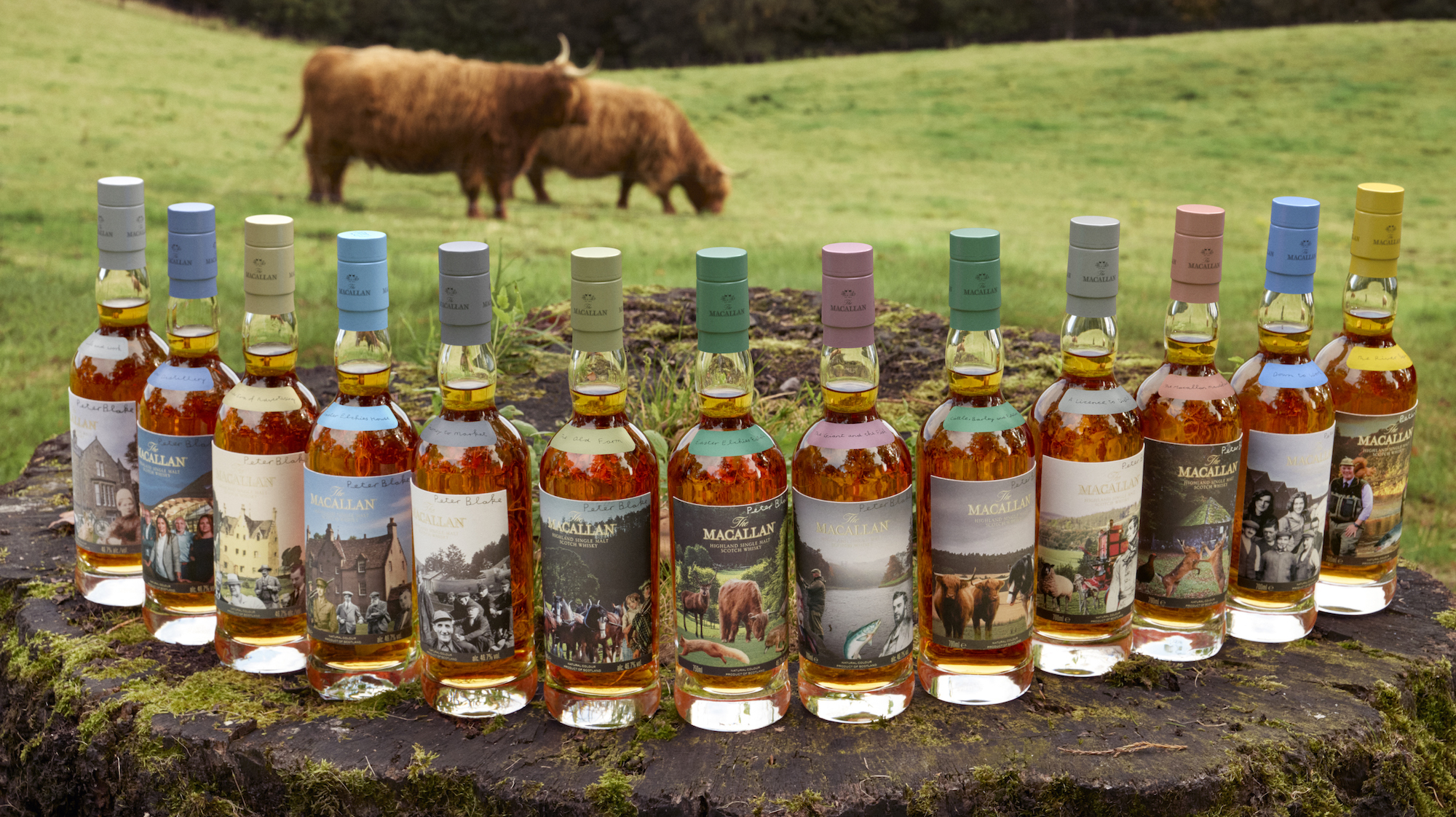 The 13 Anecdotes of Ages Collection bottles, a collaboration between Sir Peter Blake and The Macallan.

The Macallan has collaborated with artists to develop unique presentations commensurate with the whisky’s rare status. Their limited-edition bottlings are rare prizes in the spirits world. The whisky first slumbers for decades in oak casks that previously held sherry. This process results in a richly hued and flavored single malt. After bottling, the whisky can be enjoyed—or preserved forever as an asset or heirloom.

In 1976, to announce The Macallan Single Malt Scotch Whisky to the world, they commissioned art director David Holmes to create a thousand “folders,” exclusive vellum paper brochures, to send to potential distributors. For the job Holmes hired British artist Sara Midda, who visited the distillery to gather material for her whimsical illustrations and watercolors of Easter Elchies House, and later on, a box of 18-year-old whisky. Another bottle featured a Midda watercolor of a warehouse worker rolling a solid oak cask. 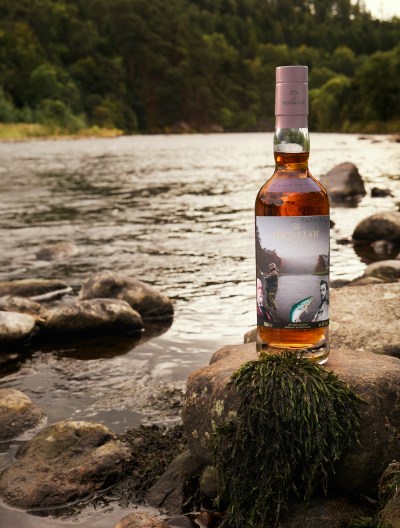 One of the bottles from Anecdotes of Ages Collection, a collaboration between Sir Peter Blake and The Macallan.

Perhaps the most well-known of all bottlings is the first—famed 1926 cask #263—which has been called the “holy grail of whisky.” The 1986 collaboration with Irish artist Michael Dillon produced a singular bottle of 1926 whisky. Dillon painstakingly hand painted a wraparound label depicting the 18th-century-era Easter Elchies House, the heart of the 485-acre Macallan Estate in Speyside. Birds flutter near thistles on the bottle’s neck. The effort’s success led to two other such collaborations.

In 1987 The Macallan released an exclusive limited-edition bottling of the same cask—24 bottles in total—bearing two different labels. Half of them showed the work of British painter, sculptor, and printmaker, Sir Peter Blake, one of the leading figures of British Pop art, who had assembled a signature collage of 1920s-era figures. Labels by Italian Pop art painter Valerio Adami adorned the other half, colorful paintings demonstrating distinctive thick black outlines. Each bottle carried the artist’s signature, like any work of art.

A highly unusual storage case, a tantalus, was specially commissioned for all 24 bottles. Inside the rectangular, brass-trimmed glass cabinet, each bottle stands on a wooden pedestal. Sliding locks keep the spirits safe, and a small brass oval proclaims the whisky’s date: 1926. 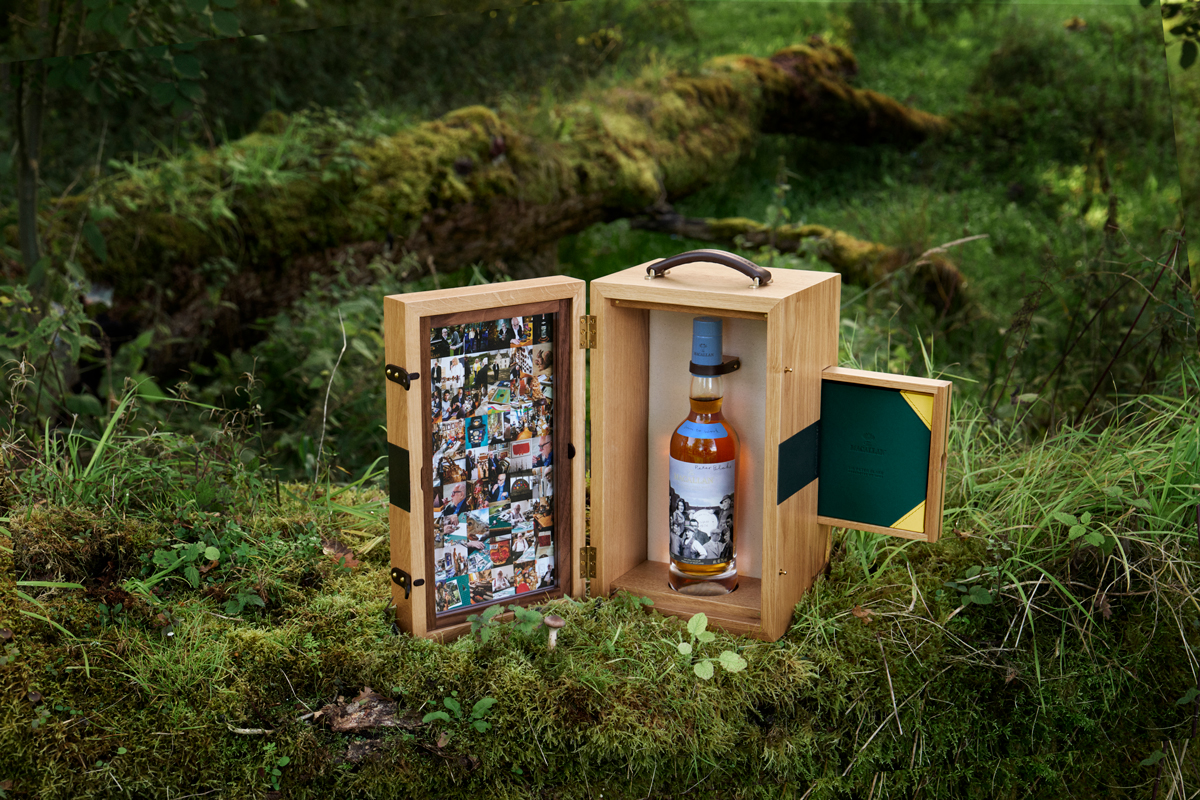 Down to Work whisky, a collaboration between Sir Peter Blake and The Macallan.

In 1996, The Macallan Private Eye collection celebrated the 35th anniversary of the satirical British magazine Private Eye, still published today. The Macallan conspired with beloved British artist Ralph Steadman, known for his ink-splotched style illustrating Hunter S. Thompson’s books, including Fear and Loathing in Las Vegas. For the cheeky limited edition of 5,000, the image of a dancing, kilted Scotsman holding a bottle of whisky aloft was screen-printed directly on the bottle, next to Steadman’s inimitable scrawl—then filled with 1984 whisky. A 70 centiliter bottle was available, along with a 5 centiliter miniature.

Beyond paint and pen, The Macallan has also put the work of photographers on their bottles. In 2008 The Macallan launched a series of limited-release whiskies (around 300 bottles per release) in conjunction with world-renowned photographers like Annie Leibovitz. The objet d’art included the special limited-release whisky and a selection of signed prints from that edition’s luxury, fashion, architecture or celebrity photographer. 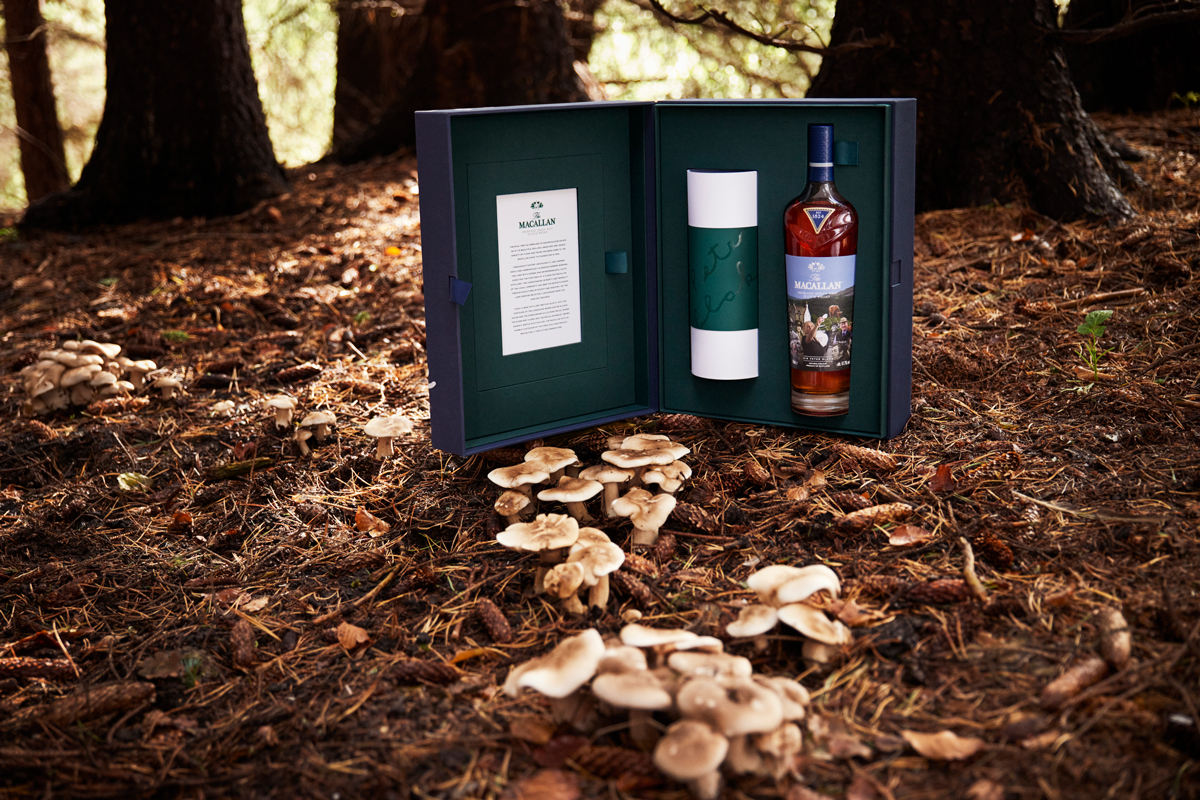 An Estate, A Community, and A Distillery whisky, a collaboration between Sir Peter Blake and The Macallan.

The Macallan and Sir Peter Blake paired up again in 2012 to release 250 sets of the Decades Collection for Blake’s 80th birthday. The hinged cover of a large oak box opens to reveal eight sections—one for each of Blake’s decades—and each holds a multimedia assemblage illustrating the whisky-making process and a miniature bottle of whisky crafted in the designated era.

To celebrate the Red Collection release, The Macallan in 2020 commissioned limited-edition labels and giclée prints from vibrant Spanish painter and illustrator Javi Aznarez, demonstrating the significance of the color red in The Macallan’s history. In October 2020, a complete set of The Red Collection featuring The Macallan 78 Years Old was the oldest aged whisky ever sold at auction, with all proceeds donated to the food charity City Harvest London.

Now, with the newest auction of Sir Peter Blake’s historic talent for a good cause, collectors are discovering that fine art is on—and in—the bottle.

How I Made This: Oh de Laval’s Censored Album Cover

Parts of Stonehenge May Have Come from Older Monument in Wales, Researchers Find