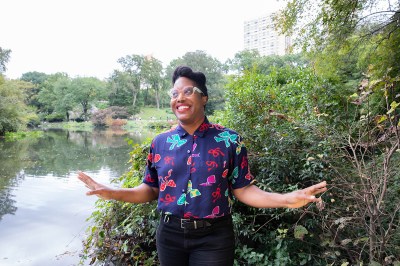 Fire Island Artist Residency just celebrated its ten-year anniversary. There are nearly 50 previous residents who have really established themselves such as artists Chris E. Vargas, A.K. Burns, and Paul Mpagi Sepuya. It feels like a moment to celebrate what’s possible and to look at what people are making. The last year has felt particularly dampened and dark, but these are the moments when the boundaries of creative practice are tested and can bear the most weight or meaning in our larger culture. There’s something so resilient not only about those who are continuing their creative process but also about the work that is being made during this time.

The special part about artist residencies is that they can provide a fresh outlook on what making is about and on how to make that work more effectively. FIAR has a rich history, particularly among the LGBTQ community, but it’s also unique because of its insularity. I’ve been thinking a lot about the residency’s relationship to art making and how it feeds the community, as well as how to continue cultivating a renewed and welcoming spirit on the island in the future. Many people, among them Truman Capote, have felt at home on Fire Island—a sense of invaluable renewal and freedom. I’m really excited to be part of the island’s history as well as people’s experience.

In light of the pandemic, I feel a special attention to ensuring the health and well-being of the residents. Our population may be less likely to have health care, may be immunocompromised, or may be living in environments of general precarity before they arrive. Fire Island also does not have a hospital and a lot of the year-round residents tend to be older. Even trying to implement standard biweekly testing was complicated because those tests have to be ferried off the island for processing. We’ve been working to raise funds specifically for Covid-19 protection and attending to the contingency of connections on the island. That said, I’m looking forward to opening up for events and residents. 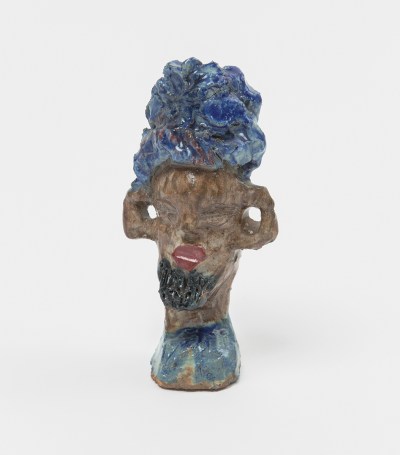 There’s a virtuosity to Aisha Sabatini Sloan’s thinking in her essays, where she discusses civic engagement, ethics, protest, and resistance, intermingled with observations on art, beauty, and nature. In her 2017 book, Dreaming of Ramadi in Detroit, she writes about David Hockney, while also remarking on pools of water, the exhibition “30 Americans” organized by the Rubell Family Collection, and police brutality toward Rodney King. Instead of shying away from difficult subjects, Sloan offers consolation with a sense of levity and pleasure. It’s a reminder that there are as many lessons to be learned from beauty as from hardship. As we continue to work through so much suffering, Sloan offers a story of resilience through a critical lens.

Former Fire Island residency artist Leilah Babirye hit her stride in her second solo exhibition,“Ebika Bya ba Kuchu mu Buganda (Kuchu Clans of Buganda),” at Gordon Robichaux in New York late last year. The surfaces of her burned and waxed wood and ceramic sculptures felt vulnerable and tactile. The heads and figures appear as if one could make an impression on them—even though some are strong, massive pieces. Babirye also incorporated found objects, such as nautical ropes, bicycle chains, and inner tubes used for headdresses in her native Uganda. She presents a material and archival history of her birth country, but also draws from personal experience as a bike messenger when she first came to New York as a refugee. I would love to build our capacity as a resource for LGBTQ artists and writers seeking asylum. 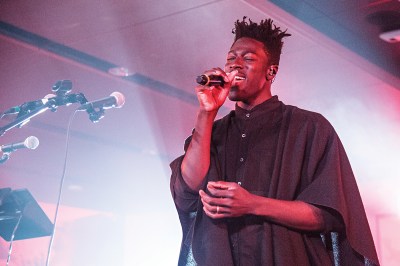 I’ve been listening to Moses Sumney’s 2020 album, Græ, and caught his Tiny Desk (Home) Concert for NPR. Besides the fact that Sumney has incredible vocal capacity and control, there’s an inherent sense of strength in his work. One track, called “Rank & File,” comprises vocal loops that showcase his ability to move seamlessly between chest voice and falsetto. That track is one example of what we can find in art and music at stressful periods in history and personal experience. During this time of prolonged isolation, it’s important to think about what creativity can do for us.

I’m currently reading Cyrée Jarelle Johnson’s first book of poetry, Slingshot. The rhythms of Johnson’s poems are based on the element of surprise in sound and imagery. In addition, the poems do a great job of conveying many areas of queer life, such as chest binding, that are not often mentioned in formal writing. Johnson offers a very vulnerable text that uses language as a soothing mechanism for moments of pleasure and pain.

“This Longing Vessel,” curated by Legacy Russell, is a group show [through March 14] featuring the Studio Museum’s 2019–20 artists in residence: E. Jane, Naudline Pierre, and Elliot Reed. Collectively, their work centers on the idea of contingency and the possibility of community. Pierre makes figurative paintings with a spectral mythology and iconography. The most interesting part is the way she attends to the body and how the figures hold one another in physically impossible stances. Jane has a wealth of cultural knowledge on how people have encountered house music and femme archetypes over time. This understanding, combined with the way Jane’s sound work plays on the permeability between cultural expressions, is really smart. Reed, in his performance art, rides the line between asking other people to be more present for themselves as individuals and with others, as we have a shared experience in a room together. There’s an element of risk-taking in performance art, but also an element of purposeful communal engagement with those around you. I’m excited to see the work of these three artists come together under one roof.

—As told to Francesca Aton

Mary Margaret ‘Moo’ Anderson, Cultivator of Bay Area Art Scene: ‘To Enjoy Art, You Have to Share It’

Down in the Mine