Helen Frankenthaler’s abstractions, often made by staining vibrant hues into unprimed canvas, have captured the minds of many, even if at one point, their aesthetic charm was once considered a demerit. “She is too proficient about beauty,” the critic Sanford Schwartz once wrote. On the occasion of a 1960 retrospective at the Jewish Museum, in a review that personally rankled Frankenthaler and her friends, ARTnews critic Anna Seelye wrote, “All of the paintings are nervous and therefore distracting.” Others poked fun at her work, comparing her canvases to wet rags.

These days, it is hard to imagine anyone lobbing these kinds of insults at Frankenthaler, who is now considered one of the most important Abstract Expressionists. With her expansive paintings featuring forms that many have compared to landscapes and natural elements, she engineered a style that tended toward large swaths of color that were allowed to bleed into the canvas. Frankenthaler knew she was playing to the senses with these works, and often saw no problem with that. “What concerns me when I work,” she told the New York Times in 1989, “is not whether the picture is a landscape, or whether it’s pastoral, or whether somebody will see a sunset in it. What concerns me is—did I make a beautiful picture?”

But just how, exactly, did Frankenthaler make her beautiful pictures? With Fierce Poise, a new book about Frankenthaler’s rise in 1950s New York, due out later this month, below is a look back at the artist’s life and work. 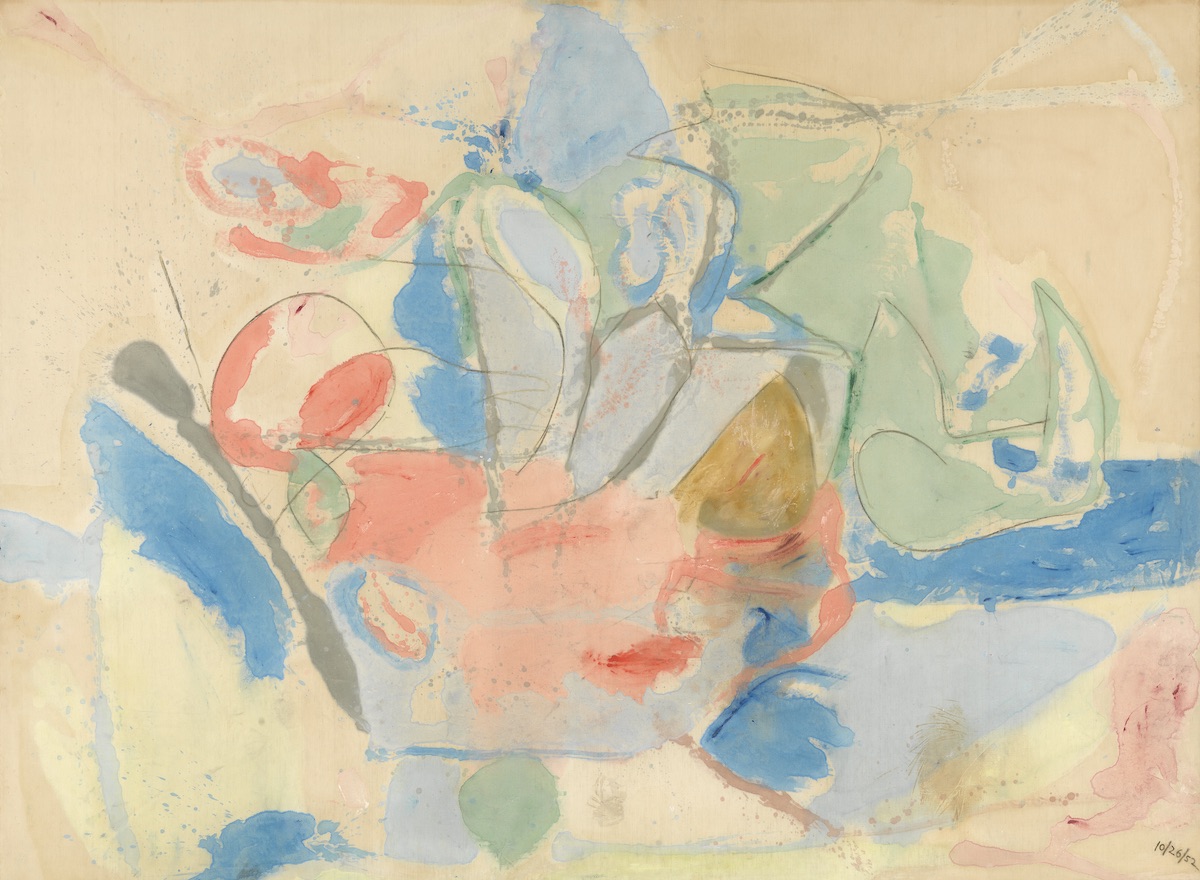 Many have attributed the beginnings of Frankenthaler’s famed aesthetic—“soak-stain,” as she often termed it—to a habit from her childhood. As a kid living on New York’s Upper East Side, she would fill the bathroom sink with cold water and pour her mother’s drip red nail polish into it, allowing it to disperse and create abstract forms in the water, contrasting with the stark white porcelain. (While her parents were bemused by the behavior, the affluent family’s maid was not.) This would act as a precursor to the technique she began deploying in the 1950s, when she allowed her paint to absorb into her canvas, creating inky, barely-there forms that coalesce in the mind’s eye to form landscapes.

In her creative breakthrough Mountains and Sea (1952), for example, a pile-up of rose- and cerulean-colored forms is cast against a dirtied background. Standing over an unstretched canvas place on the floor, Frankenthaler poured her paint, thinned with turpentine, from coffee cans, allowing it to spill forth, drip, and splatter. Because Frankenthaler’s paint was so thin, the drips are still visible. Though no obvious mountains or sea can be glimpsed here, it evokes the essence of a real landscape that Frankenthaler glimpsed while traveling in Nova Scotia. Eight years later, critics began using the term Color Field painting to refer to works such as this one.

[How a moment of crisis led Frankenthaler to paint Mountains and Sea.]

While Frankenthaler’s art would grow increasingly rich in its hues and more and more dense in its compositions, her work of that era stood in sharp contrast to the most famous Abstract Expressionists. Jackson Pollock had become known for his all-over abstractions made by flinging globs of paint around giant canvases, and Barnett Newman had made his mark on the New York scene with his steely and—relatively speaking—more minimal paintings alluding to religion and philosophical inquiries.

These and works by Willem de Kooning, Clyfford Still, Mark Rothko, and other male artists associated with the movement are bombastic, grand paintings that feel epic as one stands before them. By contrast, Frankenthaler’s paintings are more sedate affairs, filled with cool colors and exposed, unprimed canvas that hints at a psychologically fraught atmosphere. The critic Clement Greenberg, who dated Frankenthaler during the ’50s, once ascribed their searching quality to what he called Innerlichkeit, or inwardness, which he felt was “the real task” for Jewish Americans like himself and Frankenthaler. Her goal, her nephew Clifford Ross says in Nemerov’s new book, was to create “a richer, slower sense of how you perceive a picture, how you read a picture.” 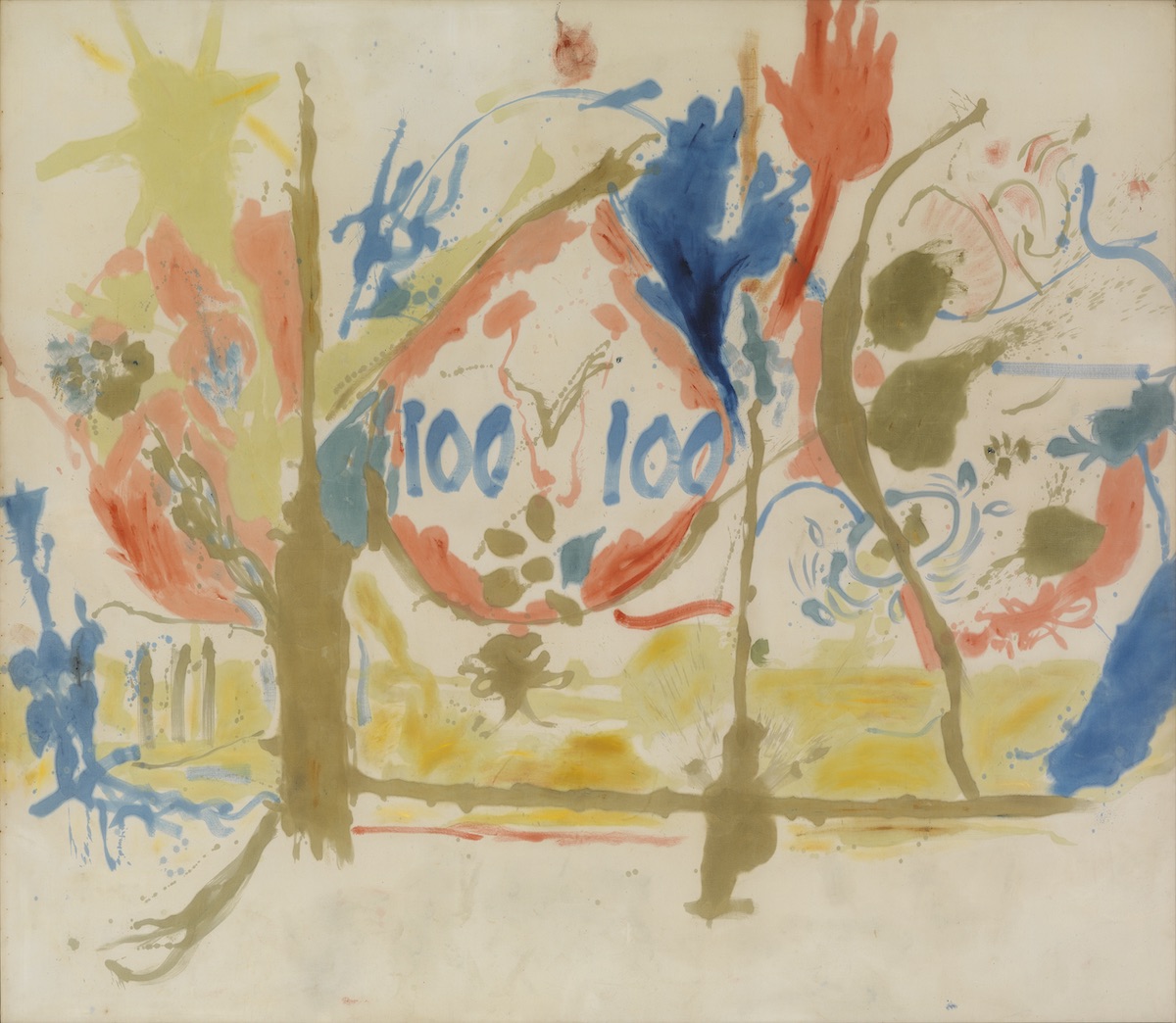 ‘I’m Not a Suffragette’

Although Frankenthaler is not a household name in the same way as Pollock or Rothko, it’s impossible to describe her as an outsider when it comes to Abstract Expressionism. A second-generation Abstract Expressionist who grappled with how she could tweak Pollock’s innovations for her own means, Frankenthaler rose to fame in her early twenties and was at the center of the New York scene. She led a relationship with Greenberg, one of the top art critics of the day, and she later married Robert Motherwell, who was known for his foreboding black abstractions focused on death and absence. (They divorced in 1971 after 13 years of marriage.) And she had contact with the day’s top artists, from David Smith to Grace Hartigan.

Frankenthaler’s gender has always been a sort of fascination, both during her lifetime and after, because she was one of the few female Abstract Expressionists. (Mary Gabriel’s essential 2018 book Ninth Street Women charts the manifold ways that gender influenced how people thought of Frankenthaler, Hartigan, Joan Mitchell, Lee Krasner, and Elaine de Kooning.) But Frankenthaler did not believe in the label “women artist” because she thought gender ought not play a role in determining whether someone has talent. In 1989, when critic Deborah Solomon asked Frankenthaler whether she was a feminist, Frankenthaler replied, “I’m not a suffragette.”

Born in 1928, Frankenthaler got a strong art education at the Dalton School, a prestigious New York prep school, from Rufino Tamayo, a Mexican painter of Surrealist scenes. Afterward, she attended Bennington College in Vermont. Even though she vowed to stop taking art classes after she graduated in 1949, she began to study with painter Hans Hofmann at the urging of Greenberg, who she started dating in 1950. Those classes helped her get away from the Cubism-inspired mode she had been trying to make her own and pushed her toward complete abstraction. By the end of her 20s, thanks in part to a Life magazine appearance featuring a portrait shot by Gordon Parks, who would later become famous for his civil rights movement photography fame, Frankenthaler had become one of New York’s most famous artists. 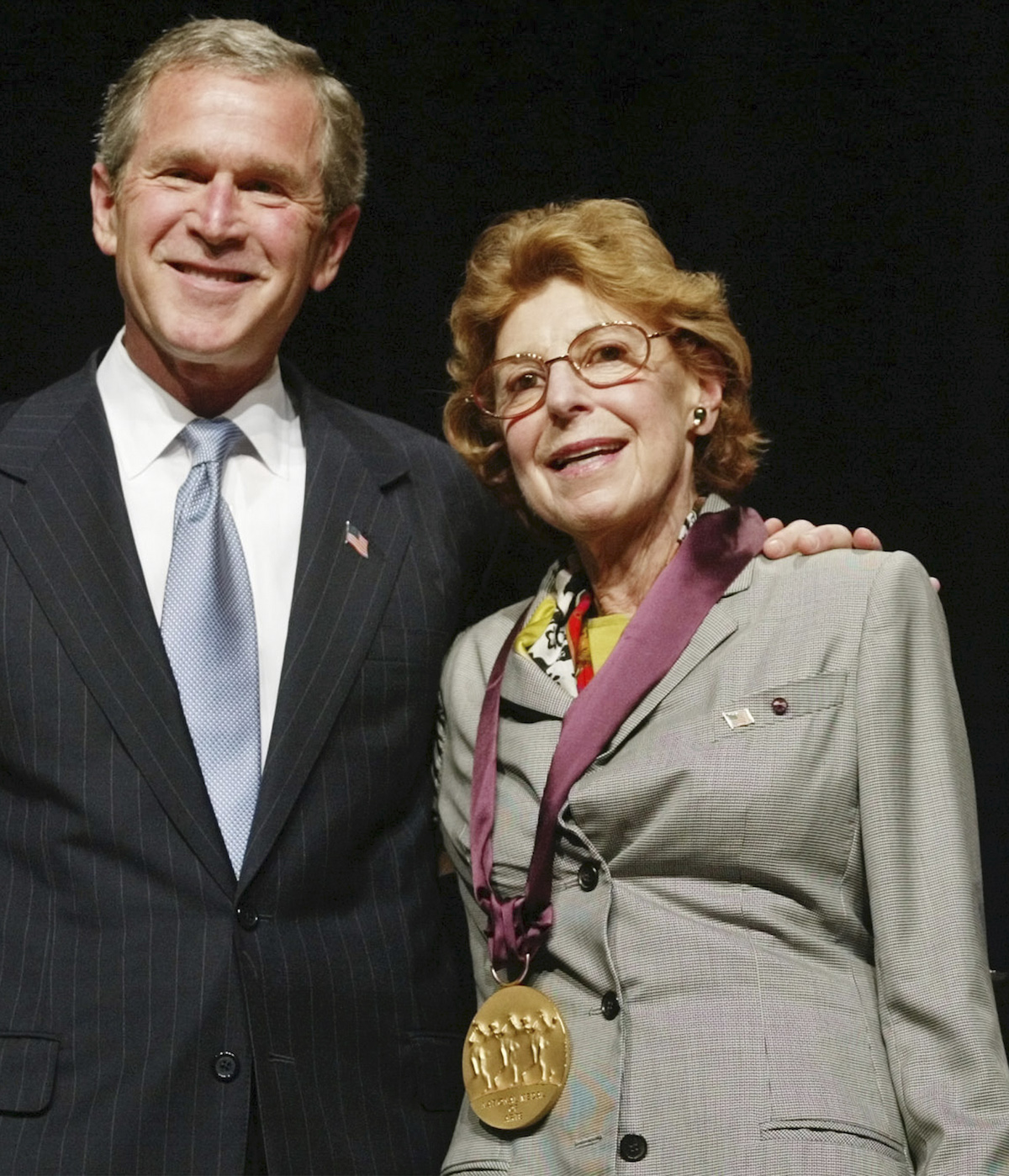 Helen Frankenthaler receiving the National Endowment for the Arts’s National Medal of Arts Awards in 2002.

By the start of the 1960s, however, interest in Frankenthaler’s art was declining as more conceptually inclined movements, which did not place as much emphasis on color, line, form, and beauty, began to take over the New York. Even though Frankenthaler’s art came to seem “old” to a younger crowd when the artist had just barely turned 30, the world’s most august institutions continued to take note. She was given a Whitney Museum retrospective in 1969, and a Museum of Modern Art retrospective followed 20 years later. And in 1966, she represented the U.S. at the Venice Biennale in Italy.

All the while, Frankenthaler’s art shifted dramatically. During the ’60s, she began to eschew oil for acrylic, a faster-drying paint that caused her forms to appear less translucent. And her compositions began to grow more intense, with an emphasis on blotchy forms and more vivid colors. A fan of Old Masters artists like Peter Paul Rubens, whose Baroque art made use of dramatic compositions and dynamic imagery, Frankenthaler continued creating abstractions that feel animated by an unseen energy. “Something in her pictures implies that color is a force, as if the painter must commit to it as a full-on saturation of the canvas, a power that all but dyes itself on the eye, if it is to have any reason for being there at all,” Nemerov writes in Fierce Poise.

Her colors continued to heat up during the ’70s, when velvety reds and deep blues began to fill the whole space of her canvases, though her ’80s works marked a return to more placid territory. Almost always, these paintings—and the ones she would continue to produce up to her death in 2011—seem to refer to landscapes, even when they descend into total abstraction. In Grey Fireworks (1982), for example, pops of pink, purple, red-orange, and white acrylic paint dot an inky background resembling a kind of fog. Although the work’s title feels downcast (what could be more disappointing than a drab firework?), the painting itself seems to resist expectations, its bursts of color create a shocking diversion from everything else surrounding them.